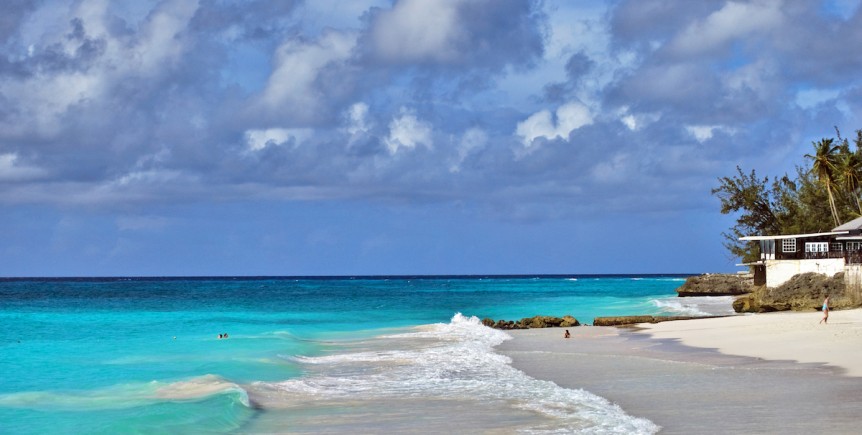 Barbados is a Caribbean island, 21 miles long by 14 miles wide. Its in the archipelago called the Leeward Islands, and sticks out a bit into the Atlantic Ocean, helping it to avoid most of the hurricane season. Its about a 7-8 hour flight from London and about 4 hours from Canada and NYC.

It was a British Colony, so everyone speaks English, and drives on the Left (most of the time!) it has a population of 275,000 and many of these are descended from black African slaves who worked on the sugar plantations in the 1700s. There are also descendants of white Scottish and Irish indentured servants. Barbados gained its independence in 1966.

It’s a tropical island so its warm and balmy but never gets about 31 degrees. The west coast is famous for its beautiful beaches which are public for everyone. And the wilder Atlantic East coast is rockier and stunningly beautiful, and less populated.

The Capital of the island is Bridgetown, which is also a Cruise ship terminal. And the airport is called Grantley Adams International (BGI). There are daily flights from London to Barbados with British Airways and with Virgin Atlantic. And from Canada and USA with Westjet, American Airlines and Air Canada.

It has a vibrant and colourful history being home to Rum and the sugar industry, dating back to 1706. Mount Gay Rum, a sponsor of Celtic Festival, was invented in 1706 and still going strong today. Their distillery is on the island and it has a vibrant visitor centre.Rum is a very popular drink with locals, and can be mixed with coke, coconut water, and the rest.

You can buy a “mini” rum in a rum shop for around $3bds. Rum shops are the equivalent of our pubs here at home, but usually outdoors, with some kind of lid on to protect from the rain and hot sunshine. They are the way to “go local” and rum shop culture is something else!

SPORT – Barbados is famous for cricket, horse racing, polo, golf, and some football and rugby. Kensington Oval is the big Cricket ground in Capital Bridgetown, and Sir Garfield Sobers is one of many Cricket legends from Barbados!

The Bajans are very polite and welcoming. There is said to be 1600 churches on the island, of all denominations, as many as the rum shops where you can grab a chilled Banks beer out the bottle, or a small (mini) bottle of rum and “lime” all day long with the locals! All religions are tolerated and there is a spectacular Jewish Synagogue in town that was restored. On a Sunday you will hear the locals singing their hearts out at church and see them walking along in their Sunday best, white hats and gloves, children all turned out lovely.

“Oistins  Fish Fry “– oistins is a fish market on the south coast. It revs up on Friday nights  – when loads of little stalls bbq very freshly caught “dish of the day” fish on a platter – cheap and cheerful and delicious and lots of market stalls selling craft works.

Usually some kind of live music on the stage. Quite hard to park, and you walk in….but something different. There is a west coast tiny equivalent in Moon Town on Fridays and Saturday nights from about 7pm, when they fry up local food over a wood stove. Very informal.  What we call a “jump up”

CATAMARAN TRIPS there are several different operators offering days out on a catamaran exploring the island from the west coast Caribbean sea.

Five hour snorkelling and lunch cruise on board Cool Runnings for example – a 60 foot luxury catamaran which sails up the west coast – see the island from the water, and snorkel with the sea turtles, dive a wreck and have a fabulous buffet on board and all the rum punch you can drink!

Typical menu would be flying fish, chicken casserole, salads, rice and peas, banana bread, all kinds of alcohol, wine with your meal.

Cool Runnings will arrange transportation to pick you up from the hotel in the morning, take you down to Bridgetown to the Careenage where you board the yacht, and bring you back again at the end. Included in the price are lunch and all refreshments, and snorkelling gear, which is approx £56 per person.

You usually picked up from your accommodation provider about 8.30am and are back by 3pm.

www.coolrunningsbarbados.com   Cool Runnings has sailed many celebrities from the world of sport and music and politics, including Tony Blair, Colin Montgomerie, Frankie Detori, Joss Stone, you name it…Wayne and Colleen…

Jeep Safari – a great way to see the whole island on a day tour – in an opened back Land Rover – you see a lot of the island, and go off road through banana plantations and on the wilder east coast near the beach. The guides will keep you informed and are big characters giving you a wonderful introduction to the island.

They serve cool drinks at every stop and plenty of soft drinks, water or rum punch, with a buffet hot lunch at Sunbury Plantation House on the way back. You will go off road, and see bits of the island you don’t otherwise get to see, and over to the beautiful unspoiled east coast with its Scotland District, and Atlantic breakers….wild, quieter and very very lovely.  www.islandsafari.com

. There are several polo grounds, and a race course at Garrison Savannah.

Car Hire – Drive-A-Matic – are our transport hire car partners. You can rent a small air conditioned car or an open topped Jimny jeep,

There are many many good restaurants on the west coast of the island – look in the little Ins & Outs book, or the Barbados restaurant book which will be in your hotel room.

The Fish Pot – at the top of the west coast.   part of Little Good Harbour hotel   www.littlegoodharbourbarbados.com    beautiful restaurant, great reviews, not just fish, but great setting and lovely for lunch stop too. Quite up market. Dress smartly.

The Atlantis hotel – famous for traditional Bajan Sunday lunch. It is on the East coast so you will probably need a hire car. Need to book in advance as very popular. You get amazing views of the east coast from the dining room – makes an interesting day out travelling over through the small island roads to the east coast.  Www.atlantishotelbarbados.com

Champers restaurant – down the south coast in “The Gap”, very nice food. Dine above the floodlit beaches and waves – fine dining. Dress smartly.

Tides Restaurant – this is in Holetown not far from your hotel. Nice bar to sit in and fabulous food.  Fine dining. Dress smartly.

Monkey Bar, Sandy Lane – for drinks and people watching! Sandy Lane Hotel is like Gleneagles and guards its reputation – it’s a gated resort and you will hve to let them valet park your car. Very expensive for anything, spectacular setting and architect design.

The Waterfront Café – Bridgetown – great jazz venue on a Thursday night. Also good for lunch during the week if you venture into “town” to shop. Its very west indian in Bridgetown.